Situated at the mouth of the Mzimvubu River, Port St Johns lies almost halfway between Durban and East London. There are several supposed reasons for the town's name, the most popular being:

(a)The name came from the Sao Joao, a Portuguese vessel which was believed wrecked near the river mouth in 1552. It has lately been established that the Sao Joao was actually wrecked near the town of Port Edward, but the early seafarers mislocated the wreck, and the name stuck.
(b) The profile of Saint John the Baptist can be seen on the cliff face on the left-hand side of the river. Only the very imaginative can see this, so why the name first came about is a mystery.
(c) That a Portuguese ship passed the river on St John's Day, 24th June.

Mzimvubu means "Home of the Hippo." The last recorded hippopotamus was the famous Huberta, who traveled the Eastern Cape extensively. Unfortunately she was accidentally shot near King Williams Town in 1931. Her remains are mounted in the town's museum.

Long before Port St Johns was established as a town and port, an area approximately 10 km from the mouth of the Mzimvubu River was cultivated with vegetables, grown to re-stock the navy ships which patrolled the South African coast. Fresh water was also taken on board here.

Port St Johns had a fort at Fort Harrison, where the 1/24th Warwickshire Regiment was garrisoned during the Anglo-Boer War.

A few kilometres from the mouth of the river is a spot named New Germany. At this spot the Imperial Flag of Germany was raised and the area declared German. After a few hours the commander, Baron von Hartwig, realised that he'd made a mistake and took the flag down again.

In the 1880's the town was established, after negotiations with the local Pondo Chiefs for rights to the banks of the river and adjacent territories.

After the annexation of Pondoland, the trade at Port St Johns increased, and the port was said to have grater natural advantages than any port between Cape Town and Lorenco Marques (now Maputo).

The last vessel to dock at Port St Johns did so in the 1940's, after which the river shallowed to such an extent as to make passage impossible.

Port St Johns became a very popular holiday town. It remained popular until the Transkei's independence in 1976, after which the town went to seed. Since Transkei's re-incorporation into South Africa, the town is once again improving.

As reported by Brownlee, a magistrate in the area, the annexation of Pondoland was caused by events on the other side of the Southern African coast: it started on account of happenings in what is now Namibia.

The area then known as Great Namaqualand was also a dependency of the Cape, with a British Resident stationed at Walfisch (Walvis) Bay. The dependency was abandoned, retaining only Walfisch Bay and its surrounding area.

The German Imperial Government moved in and annexed this area, naming it German South West Africa. Germany then took possession of St Lucia Bay and its interior, with the intention of establishing a German belt across South Africa. 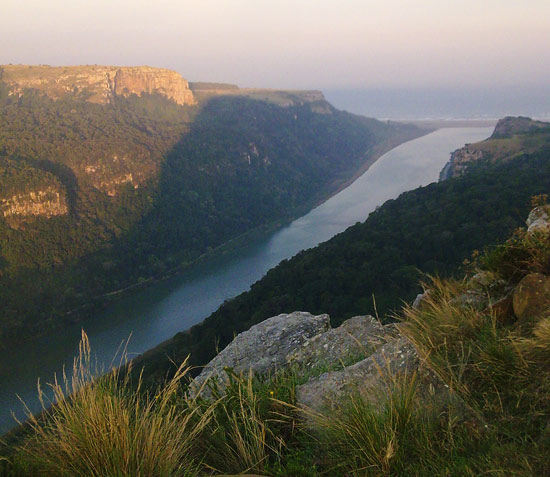 The Kaiser then ordered a colonizing party to land in Pondoland, and obtained concessions for anything and everything of value from the Pondo Chief Sigcau. In exchange, two of the chief's sons were taken to Germany to be educated. The German colonists established themselves at three places: Port Grosvenor, Mtafufu, and a few miles upstream at the mouth of the Mzimvubu River. This tiny area, on the east bank, is still known as New Germany.

This was more than the British could bear, so the governor at the time was sent to Pndoland to investigate. A meeting between himself and Chief Sigcau was arranged. The chief arrived for the 10 o'clock meeting at 2 o'clock, and requested that he and the governor meet in private. During the meeting, the Governor explained to the Chief that Faku, Sigcau's grandfather, had signed a treaty with the British Government to the effect that they, the British, had control of the coast and all coastal waters of Pondoland, and therefore the Pondo chiefs could not give it away to anyone, or allow the introduction of commerce.

Sigcau was then told that a British Resident would be appointed to Eastern Pondoland, a Mr John Scott. He set up the residency at Fort Donald, near Kokstad. Annexation was effected in 1894, without a single shot being fired. Theal, writing in the "Blue Book of Native Affairs" in 1885, reports on the annexation of Port St Johns.

In 1844 Fau and Sir Peregrine Maitland entered into an agreement where only licensed vessels could use the St John's (Mzimvubu) River. Faku died in 1867, leaving his sons Umqikela and Ndamase as heads of Eastern and Western Pondoland. Ndamase was old and predisposed towards the British, Umqikela was young and did not have the reputation as a stable leader. Ndamase died and was succeeeded by his son Nquiliso.

An agreement was entered into by Nquiliso and Major Elliot, whereby the chief ceded to the Government of the Cape Colony all the sovereign rights which he then possessed, or was entitled to claim, over the water and navigation of the St Johns (Mzimvubu) River. In return for friendly relations with the Cape of Good Hope Government, he was offered protection from attacks by Umqikela. Nquiliso was paid (POUNDS) 1000.oo for a narrow strip of land on the western side of the river from the sea, nine miles long.

Major Thesiger arrived at the St John's mouth on the Active, and hoisted the British flag there on 31 August, 1878. A fort was established at Davis Drift. A company of the 24th Warwickshire was stationed at Fort Harrison until 1879. It was abandoned and dismantled in 1882, when the garrison was moved to the mouth of the river.

On 15 September 1884, the Governor issued a proclomation completing the annexation, making Port St Johns part of the Cape Colony. The population in September 1884 stood at 308 souls, comprising 110 officers and men of the Cape Infantry, 92 European officials and traders, and 106 native servants.

At the time of writing, in January 1885, Mr Theal reported that trade in Port St Johns was very small, mainly owing to the fact that the wagon trail to Umtata had not been completed.

Considering that Pondoland's annexation started in Walvis Bay, it is interesting that there are more similarities with Port St Johns.

Walvis Bay was also annexed in 1884. With the looming of independence for the homelands (Tanskei and Namibia), White Papers were signed in respect of non-incorporation of both these towns. In effect, that they would remain South African enclaves. Both White Papers were overturned shortly after the independence of the respective Homelands.

Mvubu = "Hippopotamus". Mzimvubu = "Home of the Hippopotamus". The last hippo was the famous Huberta, who traveled the Eastern Cape and was shot near King William's Town in 1931. Her remains are mounted in the town's museum.

Port St Johns got its name either from:
(a)The Sao Joao, a Portuguese vessel which was believedhought to have been wrecked near the river mouth in 1552; or because
(b) The profile of Saint John the Baptist can be seen on the cliff face on the left-hand side of the river (requires some imagination).
(c) That a Portuguese ship passed the river on St John The Baptist's Day, 24th June, but this theory is implausible, as there is no record of which year or ship this was.

Beads made from Agate (semi-precious stones) were once common on the beach here. They probably came from an early shipwreck.

A now-dismantled British outpost which was manned by the 1/24th Warwickshire Regiment. Named after their Commanding Officer, Captain Harrison.

Named after Commodore Sullivan, commander of the vessel HMS Active, which brought Thesiger and co to Port St Johns.

This is a good fishing spot about 1.5 km from the river mouth, commonly known as a "detour", where towards the end of the 1800's the Imperial Flag of Germany was raised, and Pondoland declared a German territory. It didn't last long though, as the flag was raised in error (they should have been somewhere else). It was taken down that same afternoon.

He was a she - a long gone Grand Dame of Port St Johns.

This should really have been named Leopard Flats. One story tells of white tigers which roamed there in the old days. Of course the days could have been long and tedious then, and possibly noon came a bit early and the mixers were in short supply!

The traditional home of the King. Nyanda is the name given to the bundle of firewood carried on a woman's head, which was used as a float to cross the river.

More about The Wild Coast…

"I would like to take this opportunity on behalf of the Reddie family, the Moodley family and the Govender family to thank you and your staff for a most enjoyable stay at your establishment. Your assistant Jackie did a sterling job with the room arrangements and we would also like to acknowledge Constance, your Housemaid, for their efficiency in making sure our rooms were clean and comfortable.We will most definitely visit again and will promote Outspan Inn wherever we can. Runga Moodley MAN - Pinetown"