Things To Do in Port St Johns

These marine mammals can be seen all year round, but are best seen during the months of June and July during the annual Sardine Run.

Dolphins can be spotted all year round, often playing in the surf at Second Beach. Common Porpoise and Bottle Nose Dolphin are the most common. Rare sightings of the more uncommon species such as Heavyside Dolphin and Russo's Dolphin happen out at sea, during the Sardine Run. 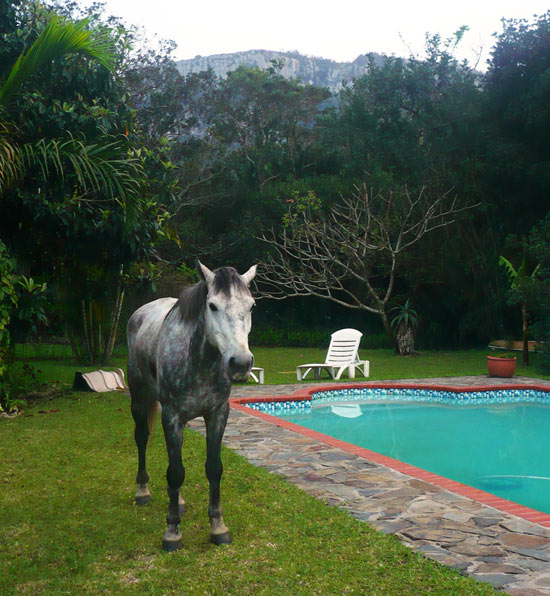 Sperm whales, Humpbacked Whales and Southern Right Whales are fairly common, and are often seen breaching and "tail slapping". The Orca (Killer Whale) has been spotted a few times.

Enquire form your host for information regarding sight-seeing trips.

Guided tours of breathtaking scenery and places of interest in and around Port St Johns can be arranged.

Situated on the main road.

Over 250 species have been identified (including the rare Cape Parrot). Many spots provide excellent birdwatching, eg, the forests, the bass dam for water birds, First Beach for seagulls, Fish Eagles and other birds.

Exploring on your own

Walking: Pack a water bottle, find a path and enjoy! The area is full of trails and paths for those keen to venture out on their own. Mountain-biking can be done just about anywhere, from easy trips on roads, to adrenaline-rush single tracking. The Mzimvubu River has over 20km of canoeable flat water. The local club, Pondoland Paddlers, welcomes non-members to join them on fun trips or the weekly time trials on Wednesdays.

Your host will be able to provide you with the necessary information.

Take the road up through mTumbane Township (between town and Second Beach). Turn right and drive to the end of the road. Stop and walk down. Please be careful. The Blow Hole is at its best when seas are rough. Water id forced into a narrow gully which ends in a natural chimney-like hole from which the water shoots into the air for about 20 metres. A warning to the venturesome: keep your distance, as people have been sucked into the Blow Hole never to be seen again.

Situated on top of Mount Thesiger. This was part of the Port St Johns Military Base of the former Transkei military during the independence years. There are two dams - the old (small) and new ones. Good birdwatching. The airfield is 1.2km long and is now used for private aircraft. The view from the end is unsurpassed. Please note that the cliff edge is not far from the end of the runway. Baboons are sometimes seen up here, and if you're lucky you might catch a glimpse of one of the few remaining leopards. This is a definite must-see!

The name means "The Place of the Smell". Sulphur springs. These form an important part of the Pondo Culture. The foul-smelling water is used for medicinal purposes, both internally and externally. If you do venture up to the springs, please respect the local's culture and do watch what you step in!

This beach to the north of Port St Johns is one of the most isolated. A few huts will be passed en-route, but there is nothing except Africa out here. Fishing off the rocks on the south side of the river produces good catches of Garrick and Kob in season.

The common belief is that Mngazi means "Blood", but linguists believe that it refers to the thorn trees in the valley, "Mga". This river opens to the sea through a wide lagoon. Popular with fishermen and water sports enthusiasts. Superb for birdwatching.

About 20 km from Port St Johns on the Lusikisiki road is a signboard directing you here. You can take walks in the forest (home to butterfly species from nowhere else), or carry on driving down to the river. The mouth can only be reached by boat, but short walks along the river are worthwhile. Like all the Wild Coast rivers, Mtafufu is ecologically sensitive - please respect this.

Umgazana, once thought to be "Little Blood River", is now also believed to refer to the thorn trees in the valley. Today it is a haven for the lucky few who have cottages on its banks, and for the diverse bird and marine life found there. Its pristine natural condition is jealously guarded by the cottage owners. The river has Africa's southernmost Mangrove swamp, where all three species - viz. Black, Red and White Mangrove - grow. These Mangrove communities act as nurseries for breeding fish, as well as protection for the numerous bird species found there. The uncommon, shy but brightly-coloured Mangrove Kingfisher can be seen flitting through the riverine bush. This area is popular for snorkelling and fishing. Look out for the Fiddler Crabs, which have one enlarged nipper. Take the R61 towards Mthatha for +/- 20km and you'll find the turn-off towards Mpande. Continue on the road until you get to a hill where there is a sub-Post Office, and take the turnoff to the left.

Part of the Goso Fault, the Magwa Falls are the highest in the Transkei. Fraser Falls are less spectacular, but well worth a visit. There are also Visitors Falls, Little Falls and Picnic Falls to visit. Take the road to Magwa Tea Plantation just befor Lusikisiki, and follow the signs.

The site where the Grosvenor sank over 200 years ago. Many treasure hunters have tried to find the remains of this vessel, including the author Sir Arthur Conan Doyle. Many legends surround this wreck, one of the most fascinating being the story that the Peacock Throne of Persia was on the ship. The wreck has recently been found, and divers have verified its authenticity.

This 2,200 m2 coastal reserve consists mostly of open grassland dissected by perrenial streams and flanked by the magnificent forested ravines of the Msikaba and Mtentu Rivers. Canoes may be taken up these rivers, which is the only place in the world where the Pondo Coconut (Mkambati Palm - Jubaeopsis caffra) is found. Further up the river, a colony of Cape Vultures breed on the sheer cliffs of the gorge. Tree Ferns, Palms, Proteas and Ericas typical of "Fynbos" grow along the river banks. Herbivores such as Zebra, Red Hartebeest, Eland and Blesbok graze the grasslands. Stunning waterfalls that cascade straight into the Indian Ocean can be seen here.

This beautiful Wild Coast bay was given its name after a ship loaded with coffee beans was wrecked here. Some of the beans washed ashore, germinated and flourished for a while. Fishing and swimming are good.

Hole In The Wall

As much a feature of The Wild Coast as the weeping beaches, turquoise ocean and peaceful estuarine lagoons is the great stone sculpture carved from the sea cliffs by wind and waves. The noise made by the waves has given it the Xhosa name esiKhaleni - "The Place Of Noise".

"We would just like to again say thanks for all the assistance and hospitality given to us during our shoot down in Port St Johns. The shoot went very well and a great time was had by all as you well know. Till next time.... Thanks and regards" - Karin, Black Coffee Productions